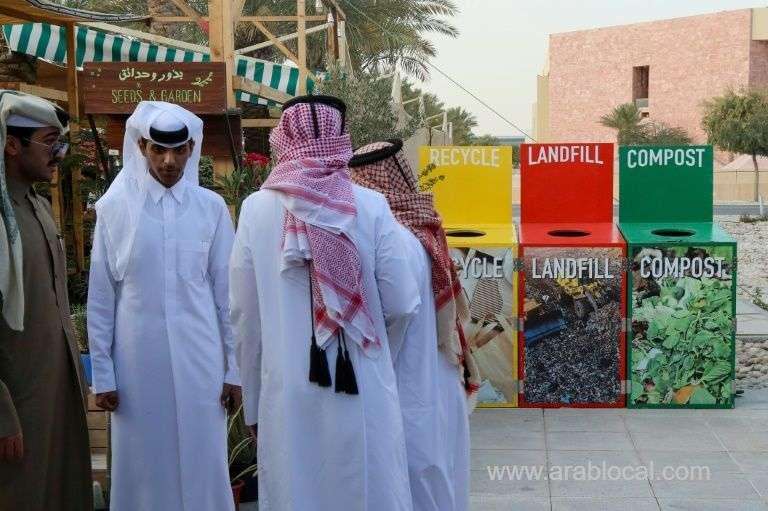 In Qatar, not often associated with zero-waste initiatives, one weekend market is bucking the trend and encouraging visitors to ditch plastic for more sustainable choices.

At the Torba Farmers’ Market in northwest Doha, shoppers are encouraged to shun plastic bottles, cups, cutlery and plates in favour of reusables.

“People didn’t necessarily have the means or the place to do it before,” the market’s creative director, Ghada al-Khater, told AFP on a recent sunny Saturday afternoon.

For forgetful shoppers, a stall manned by volunteers hands out free porcelain mugs on condition they are returned, after which they are washed and reused.

Single-use plastic bottles are entirely banned in favour of water stations that provide free rehydration to visitors and their canine friends.

The market began life as a pop-up in mid 2016. It now hosts dozens of stalls and attracts as many as 5,000 visitors every weekend during the cooler autumn and winter seasons.

“The motivation (to promote sustainability) comes from seeing where we were, how far we’ve come since the inception of the market and how far we can go,” said Khater.

“If one more person or three more people come out of this season having reduced waste, or reduced their footprint, I think that’s amazing. The more people we can bring and change, the better.”

– ‘Always needing to do more’ –
As far back as 1974, Qatar passed a “general cleanliness” law. Then in its 2004 constitution, it pledged to “protect the environment and ecological balance”.

The country currently produces 2.5 million tons of solid waste — including domestic, construction and industrial — of which only eight percent is recycled, according to official statistics.

“I’m a scuba diver and I have seen what plastic has done to the ocean. In Doha or anywhere else in the world, I see the effect. To see Doha making this move is very beautiful,” said market-goer Rashid al-Kuwari, 28.

“We are always needing to do more.”

Qatar aims to recycle 15 percent of its solid waste by 2022 when it will host the World Cup, but it still has a long way to go in its recycling goals when compared to other countries.

Germany, a world leader in sustainability, recycles 67 percent of household waste, 70 percent of industrial waste and 90 percent of construction waste.

Qatar produces the highest level of plastic waste per capita of all the Gulf states, according to researcher Sultan al-Salem.

Individuals in Gulf states produce 1.5 kilograms (3.3 pounds) of waste per day on average, roughly 14 percent of which is plastic, according to a Qatar University study.

– Highest per capita emissions –
“I was told I should have a badge for the plastic police,” laughed juice stall-holder Sarah Cameron, a New Zealander who came to Qatar to teach, but now consults for the market on sustainability strategies.

“Sometimes it’s frustrating. We came in with big ideas, then we realised we had to take a few steps back,” she said.

“Every year we do things a little bit more and are stricter with sustainability,” she added, as a customer produced her own reusable metal straw to enjoy one of the stall’s freshly made juices.

Qatar’s ruler, Emir Sheikh Tamim bin Hamad Al-Thani, vowed at the United Nations last year that the 2022 World Cup would be carbon neutral, but gave little detail on how this would be achieved.

Single-use plastic bottles could be banned from stadiums under sustainability proposals reportedly being discussed by organisers.

The country remains a major polluter, its citizens routinely have the highest per capita CO2 emissions of any nation on earth, and Qatar’s economy is largely focussed on fossil fuels.

It is consistently among the top three gas producers worldwide and shares the world’s largest gas field with Iran.

But for 18-year-old student Yousef al-Derbasti, who was perusing stalls with relatives, the Torba Farmers’ Market is a step in the right direction.

“You can entertain people and bring people together while at the same time raising awareness,” he said.