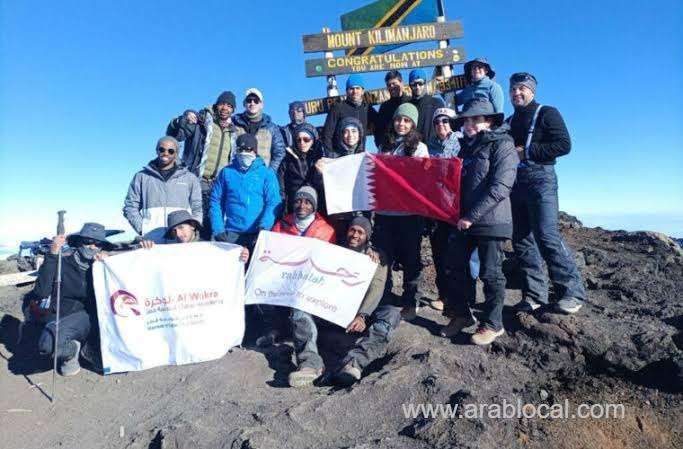 According to Abdirahman Handule, a teacher at Qatar Academy Al Wakra, students are more confident when they learn outside the classroom. Handule and 13 students from Qatar Foundation schools just returned from climbing Mount Kilimanjaro, the tallest mountain in Africa.

Qatar Academy Al Wakra (QAW) and Qatar Academy Doha (QAD), both affiliated with Qatar Foundation (QF) Pre-University Education division, teamed up earlier this month to climb Mount Kilimanjaro in Tanzania, the world's highest dormant volcano. The trip provided students with a life experience unlike any they would have in the classroom. Having led similar treks in his own life, Handule was inspired to lead the trip.

The main purpose of the trip was to encourage our students to become more independent, determined, and ambitious, as well as to step outside their comfort zones. The group accomplished so much more than I was expecting - I was astonished by their strength and should be proud of their accomplishments," he said.

Students began training at the beginning of the year to ensure they were physically and mentally prepared for the challenge. Physical training often included walking on the beach at 4 a.m. and high-intensity interval training sessions, along with workshops on cultivating a positive mindset.

Handule explains how the shared experiences helped the students, who were ages 15 to 18, become closer as a group, saying: "From the get-go, the team supported and encouraged each other. People could lean on each other for support if they got tired or needed extra motivation."

A 15-year-old student from Qatar has become the youngest person in history to climb Kilimanjaro.

Despite being physically fit, QAD student Jassim Al Thani said the climb was very different from the exercises he had done to prepare. “When you exercise, you always have an end in sight. You think you've arrived at the top of a mountain, but there are more ledges to climb, so you have to keep going. We had some difficult times, but by the penultimate stage of the journey we were eager, and the summit was exhilarating."

Depending on terrain and camps, it took five days to climb and two days to descend Mount Kilimanjaro. To keep mentally active during down times, the students played chess and cards. Also, they ensured that no waste was left on the mountain, as well as protecting the environment.

As a result of the experience, Handule believes the students will benefit greatly not only in their future education and career, but also in their personal and professional lives, opening doors and providing opportunities they might not otherwise have been able to imagine. Having overcome this hurdle, they can say that they can overcome anything in the future, he said.

He admits there were times he struggled, but now he realizes that everything is possible if you persevere. It was an unforgettable view that made him most proud.

An experience out of this world

I was so proud that I made it up the sheer rock wall using my hands. It was incredibly difficult. While you get used to seeing clouds when you climb, looking around the top of that wall was an amazing experience - fields of clouds were everywhere."

The students' reactions when they reached the summit were Handule's favorite part of the trip. It made me so proud to see their faces as they reached the top. They persevered, went through it, and climbed Kilimanjaro. There was a noticeable difference in their character and persona between before and after the journey. They all seemed more confident and their sense of achievement was tangible."

In addition to shared school activities outside of the classroom, Al Thani would like to encourage others to participate in them. Life's challenges teach lessons that can never be taught in a classroom. Take it one step at a time - one step, one thousand steps, ten thousand steps - and you'll get there. "The important lesson you must learn is to start."

As of now, there are no plans to do another Kilimanjaro trek, but it is something Handule believes would be considered in the future, and something he encourages students to do at least once in their lifetime.